how the pros skate

Reprinted, with permission, from PULSE, Sport Medicine Council of Alberta.

Scientific investigations of hockey and hockey skating are numerous. The research in this area has answered questions relating to biomechanics, kinematics, off-ice predictors of skating performance, work physiology of skating and hockey, game-performance skating characteristics, female hockey, and ringette. In this article, I will undertake the task of describing skating as it relates to the many professionals who read PULSE.
A study we published in Sports Medicine, Training and Rehabilitation (1) answered more questions about game-performance skating and created hypotheses about other aspects of skating. We identified the skating characteristics most commonly used during a game by NHL forwards.

For the physiologist, strength and conditioning specialist, and coach, these results have implications for on and off-ice fitness training. Since a small percentage of time was spent skating at a high intensity, and relatively high percentages of two foot glide and struggle for puck or position, the fatigue experienced during a hockey game may be caused by a combination of static muscle contractions, high and medium intensity skating, and upper body movement. Struggle for puck or position is primarily an upper body characteristic with the legs being used for stability and balance. Struggle for puck or position included body checking, stick checking, holding, impeding an opposing player’s progress, and trying to gain possession of the puck along the boards or in open ice. In Green’s (3) review of the metabolism of ice hockey, he reported that upper body activity is superimposed on leg activity. Foster, et al (3), when studying fatigue in speed skaters, showed evidence to support the hypothesis that either the static contractions of the quadriceps (during the glide phase) or high muscle forces (during the propulsion phase) contributed to restricted blood flow and oxygen delivery.

For the skating instructor and coach there is a good indication that two-foot glide is an important skating characteristic. A hockey player needs to maintain balance on two feet while moving straight, turning, handling the puck, and engaging in body and stick contact. The two-foot gliding is interspersed with striding characteristics and struggle for puck or position. A hockey player needs the ability to proceed into a skating characteristic from a two-foot glide, make a quick stride or two to maintain speed or position, and return to a two-foot glide position. The typical balance position is for a player to have his or her skates positioned slightly wider than shoulder width apart, ankles dorsi flexed, knees flexed, and the trunk flexed with the blade of the hockey stick close to, but not always, on the ice.

Research has shown several other characteristics the are indicative of high-performance skating: wide strides (8), forward lean during two-foot gliding, acceleration and high intensity skating (1,5,6), quickly placing the skate on the ice after push-off (5,8), skating velocity is more dependent on stride rate than stride length (5), and a sinusoidal (wave-like) movement of the center of gravity during striding (2).

When all of the above mentioned skating characteristics are compared with the skills and drills used in many skating instructional programs (“Power Skating”), there is little consistency in the application of game-performance skating techniques. Many “power skating” instructional programs focus on non-game related skills such a gliding on one skate for extended periods of time, skating tricks like dancing the polka and a “duck walk,” attempting to skate with a vertical trunk position, and trying to push straight backward (instead of to the side to facilitate a wide stride). “Power skating” has its roots in figure skating, as such, many instructors use figure skating skills/drills in the attempt to enhance game-performance hockey skating. These kinds of skill/drills and body positions are rarely, if ever, used during a game and their use in performance enhancement programs should be questioned. Marteniuk (6) indicates that practicing non-game-like skills and drills can introduce artificial situations that can inhibit the acquisition of a high-performance motor program. To develop an effective motor program, a hockey player should be confronted with the environmental conditions that will control his or her movement during a game.

In relating skating to injury potential, the trunk is flexed in every skating characteristic, with the trunk extensors being chronically loaded. When the spine is flexed, the intervertebral discs will have a posterior force place on the nucleus pulposus which can weaken the disc wall increasing the risk for a herniated disc. On the opposite side of the body, the trunk and hip flexors are chronically shortened. Chronic trunk flexion may be a factor in back injuries and abdominal strains among hockey players. Repeated hip abduction during striding, ballistic eccentric contractions of the hip adductors, possible over-stretching by players, and muscle imbalances between the hip abductors and adductors, may play a role in the seemingly high incidence of groin strains in hockey players.

In conclusion, we know a lot about skating biomechanics and kinematics as they relate to teaching and performance enhancement of game-performance skating. We are answering more questions now, and getting a clearer picture about, the physiology of skating. And we are beginning to get an understanding of the causes of skating related injuries. More research is needed in all areas to continue our search for the best way to improve the skating performance of hockey players. 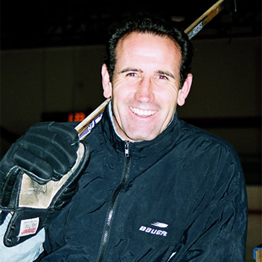